By Zachary Hoffman and Luka Papalko

If days one and two of PowerForward didn’t settle your appetite for utility jargon, then day three should have fulfilled any left over cravings.

Chris Villareal, President of Plugged in Strategies provided the first presentation of the day, introducing what would be the focus of many of the day’s speakers: distributed energy resources (DERs). Described as grid-connected power sources located close to customers, these resources are playing a larger role in the grid as technology advances.

“All these pieces together, the value of these resources are not just single values,” said Villareal. “Storage resources provide value to the customer, distribution grid and transmission systems.”

Villareal noted the importance of creating an environment where these advancements can have a place in the grid. “If policies are there to create barriers, consumers will be frustrated and will find ways to work around the system,” he said. “A network is more valuable when more things, more people are connected to it.”

Following Villareal, Julio Romero Agüero stressed DER readiness, “DERs is ready and here to stay.” Calling distributed generation interconnection, “one of the most important challenges facing the utility industry,” he touched on the need for utility systems updates to be relevant in this new standard.

Another point brought up, a constant throughout the panel on distribution system safety and reliability, is two-way power flow. With connected distributed generation, energy may flow two ways – not just one. “We are evolving from passive systems to becoming active systems,” Agüero said.

Tom Key made the observation that, “we are making the shift from accommodating to integrating” when it comes to the transition from a more conventional grid to a more flexible, integrated grid.

Providing a visual picture of the challenges ahead, Michael Coddington  described the many flowing pieces in today’s energy market as an interconnected puzzle. Smart inverters, new technology, standards, codes, interconnection rules, all must work hand-in-hand with each other to form the larger picture of the modern grid. 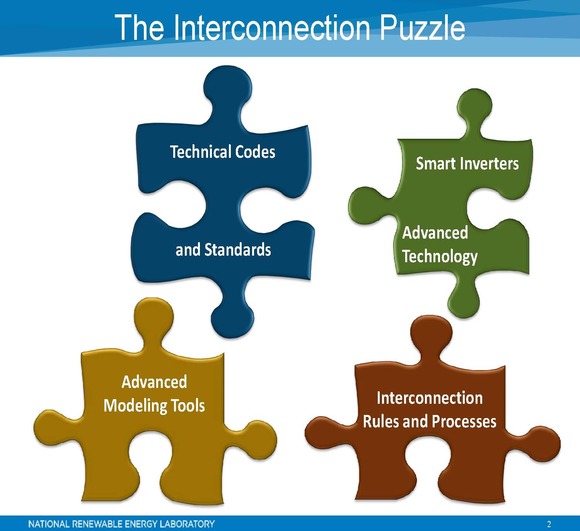 “We are currently moving from an orderly, controlled system to more of a chaotic environment,” he said. Placer indicated that planning for a new utility environment is not an issue of complexity but one of order.

As talks for planning continued, Villareal summed things up well by saying, “Ohio has the ability to start planning now.” He added, “We must have the ability to understand the system needs.”

This planning, as detailed by Alan Cooke  is driving the utilities to think about new ways to do planning. “You don’t always have to think about building more lines and wires.” He continued, “You can start thinking more about controlling generation and instituting some of the non-wire solutions.”

The changing of how systems operate and how utilities plan, also shifts towards what Joshua Wong called the transactive energy platform. “Traditional planning is inadequate for DERs,” he stated. “DER is a connection process. We must figure out how we tie them together.”

Providing the second presentation of the day, Vijay Singh of NextEra Energy Resources shifted the focus to the topic of energy storage and pointed out that the dropping prices of battery storage in recent years is a sign of its increasing influence on the modern electric grid.

“If you look at lithium-ion battery prices … we have seen a dramatic reduction in cost over the last four to 10 years,” stated Singh.

Calling attention to new and expanding markets, such as that of electric vehicles (EVs), Singh stated that the falling prices, as well as the increasing efficiency and duration of lithium-ion batteries, make it a natural partner for the modern electric distribution grid and an important part of the electric distribution platform.

Discussing what was originally planned as a standalone 4.3 MW solar array for the Village of Minster, Harrod discussed the village’s decision to enter into a public-private partnership for the project that included a 7 MW lithium-ion storage system.

Harrod stated that as the original project began, new legislation and financial constraints made it clear that the village needed to seek out possible partners. After initially finding none, thought gave rise to pairing the project with an electric storage system. After pitching the updated project, the village was able to quickly find willing partners and began construction.

“We learned that this model was very successful for us,” stated Harrod. “It was good for our community.” He went on to explain that the combination of solar and energy storage worked so well that the village was considering a second and third project.

Harty brought the perspective of one of Ohio’s largest companies and was excited to see that so many other presenters shared Honda’s views.

Harty outlined Honda’s plan to reduce their year 2000 CO2 emissions by 50 percent before the year 2050, and stated that they believe EVs, renewable generation and energy storage will be exactly how they can make that happen.

To close out the day, Jeff Taft of PNNL returned to tie the whole three days together, stating that “based on all the things we’ve heard this week, the word platform is clearly still in the running for utility term of the year.”

One thing Taft wanted to focus on before closing out the day, however, was the role that energy storage could play as a piece of the grid platform and architecture, rather than only being something behind the meter or paired to renewable energy.

“Storage is a flexible kind of component,” stated Taft. He wanted to remind the Commission that distribution utilities could utilize energy storage to improve the resilience and reliability of the grid, as well as to help edge out the volatility of user demand.

Most importantly, Taft came back to the idea of the grid as a platform, stating that “the platform concept can help you sort out what fits where.”

With so much great information on the technologies that will make the future electric distribution grid possible, it’s time for the Commission to get down to work before PowerForward Phase 3 can begin.

The PUCO would like to thank everyone who participated in PowerForward: Exploring Technologies, and would like to encourage you to follow us on social media for future updates and announcements on Phase 3.

You can find webcast recordings and updates on the PowerForward page at www.PUCO.ohio.gov.